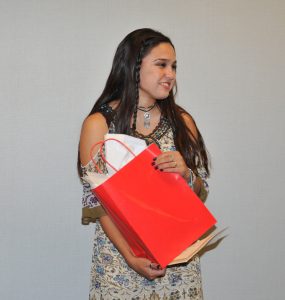 Hannah is graduating from Flower Mound High School this Spring and she plans to attend the University of North Texas with a major in Criminal Justice. Hannah also attended the Dallas FBI Teen Academy in 2015.

In addition to her sports activities, Hannah went through the Flower Mound Citizens Police Academy and is now a member of the Flower Mound Police Explorer Program. She also assists with students with disabilities through the Circle of Friends, volunteers for her church, and has raised funds for the Humane Society. She has received awards such as the American Sign Language Honors Society and Character Counts Award.

Hannah wrote a very interesting essay describing her interest in criminology as well as her time in the Explorer program and at the FBI Teen Academy. After graduating from college with a degree in Criminal Justice and a minor with a teaching degree, she would like to become a police officer and work her way up until she is an FBI agent.

Thanks to the following Dallas FBICAAA Board members for reading all the scholarship applications and deciding on the winner. They are Paula Van Wagoner, Larry Lavine, Gina Moore, Mayja Mendez and Hyattye Simmons.