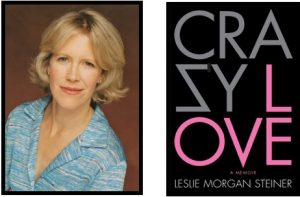 Dinner will be served at 5:30pm and the program will begin at 6:00pm. Security will allow attendees to begin arriving at 5:00pm.

We ask that every member please register for the meeting (link below) as it helps us to better plan for dinner.

The FBI prohibits the following items from being brought into their facility. Please be sure to leave them in your vehicle.

Firearms, knives, and weapons of any kind.

We look forward to seeing you on November 30th!

At 22, Leslie Morgan Steiner seemed to have it all: a Harvard diploma, a glamorous job at Seventeen magazine, a funky New York City apartment. Plus a handsome, funny, street-smart boyfriend who adored her. But behind a façade of success, this golden girl hid a dark secret. She’d made a mistake shared by millions: she fell in love with the wrong person.

At first Leslie and Conor seemed as perfect together as their fairytale wedding. Then came the fights she tried to ignore: he pushed her down the stairs of the house they bought together, poured coffee grinds over her hair as she dressed for a critical job interview, choked her during an argument, and threatened her with a gun. Several times, he came close to making good on his promise to kill her. With each attack, Leslie lost another piece of herself.

Gripping and utterly compelling, New York Times bestseller Crazy Love takes you inside the violent, devastating world of abusive love. Why did Leslie stay? She thought she loved him. Find out for yourself if she had fallen truly in love – or into a psychological trap.

Today, Leslie Morgan Steiner is an expert on violence against women and other women’s issues. Her TED Talk about surviving domestic violence, titled “From the Ivy League to a Gun at My Head,” has been viewed by over four million people. She has served as a celebrity board member for the One Love Foundation, in honor of slain University of Virginia senior Yeardley Love; the National Domestic Violence Hotline; Liz Claiborne’s MADE council; and as former spokeswoman for The Harriet Tubman Center in Minneapolis, the country’s oldest shelter for abused women.

She is a regular national television and radio guest, appearing on National Public Radio, NBC’s Today Show, The Diane Rehm Show, CNN, MSNBC, Fox News, and other programs.  She holds a BA in English from Harvard College.  Her first job was as an editor at Seventeen Magazine; she financed her MBA in Marketing from Wharton by writing for Seventeen, Mademoiselle, New England Monthly and Money Magazine.  She is a member of The UC Hastings School of Law “Wise Women” council.

She is also the editor of the anthology Mommy Wars and a former columnist for washingtonpost. com. She currently writes the Two Cents on Modern Motherhood column for ModernMom.com.  The ethics of global surrogacy is the subject of her November 2013 book, The Baby Chase, as well as a September 2014 TEDTalk.

She lives with her three children in Washington, DC.

Registration is required for this event

Registrations are closed for this event.