Please join us on Tuesday, July 13, 2021 from 6pm to 8pm for a presentation from Alex del Carmen regarding Mass Shootings.

Registration is open and will close Tuesday, July 13th at 2pm. The Zoom link will be included in your booking confirmation and reminder emails.  Also, you must log into Zoom with your membership name or you will not be entered into the event.

If you have trouble logging into our site, please use the Contact Us form to request assistance. 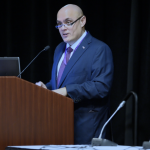 Alex del Carmen received a Ph.D. in Criminology from the College of Criminology at the Florida State University. He is considered an authority on the topic of race and crime with particular emphasis on racial profiling in law enforcement. Dr. del Carmen has written numerous articles in internationally recognized journals and published several books. His most recent book is titled “Racial Profiling in Policing: Beyond the Basics” with Kendall Hunt. It is scheduled to be released in August. Dr. del Carmen has presented his research findings on racial profiling, throughout the world (Scotland, Belgium, Slovenia, Spain, United Arab Emirates, and Italy). He has trained thousands of police officers including all of the Texas Police Chiefs since 2001. In addition, he is responsible for creating the Texas racial profiling statistical template widely used by law enforcement agencies throughout the state. He is often a guest on Fox, CNN, Fox News Radio, Telemundo, Univision and NBC, among other media outlets.

Dr. del Carmen is currently a Professor and Associate Dean of the College of Liberal and Fine Arts and the School of Criminology, Criminal Justice and Strategic Studies at Tarleton State University. In that role, he oversees the criminal justice program, graduate studies in public administration, Corp of Cadets, and five academic institutes. He has also served as a Federal Monitor for two of the most significant police reform cases in the United States. Currently, Dr. del Carmen is serving as a Special Master for the United States District Court for the District of Puerto Rico, on the Puerto Rico Police reform case.

Dr. del Carmen lives in the Dallas-Fort Worth area. He is married and has two children.

Registration is required for this event

Registrations are closed for this event.